First step to major I-80 reconstruction from Ridge Road to U.S. 30 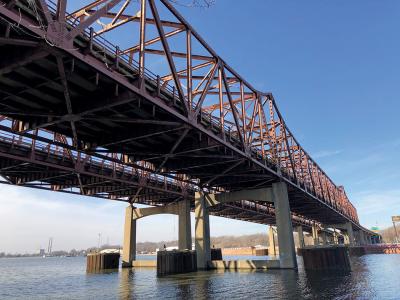 CHICAGO – The Illinois Department of Transportation announced today that a $48 million project to replace the eastbound Interstate 80 bridges over Hickory Creek, Richards Street, Rowell Avenue/Canadian National Railroad, and westbound over Richards Street, in Joliet, Rockdale and New Lenox, will begin, weather permitting, Monday, June 28. The project is part of advance work leading to the $1.2 billion reconstruction of I-80 through Will County, a cornerstone of Gov. JB Pritzker’s historic, bipartisan Rebuild Illinois capital program.

“This project is about much more than replacing worn concrete and steel,” said Illinois Transportation Secretary Omer Osman. “It represents a significant investment in the Will County area and is a big step forward in our work to improve safety, mobility and create economic opportunity for years to come. We’re asking drivers to be patient, slow down and pay extra attention driving in and around any work zone.”

Starting Monday, June 21, overnight work will begin to install concrete barriers to prepare for the work zone. Motorists should expect lane shifts and lane closures on both sides of I-80, between Chicago and Briggs streets, from 9 p.m. to 5 a.m. Monday through Thursday and from 9 p.m. Friday to 10 a.m. Saturday. At least two lanes in each direction will remain open. Daytime traffic will not be impacted.

Motorists can expect delays and should allow extra time for trips through this area. Drivers are urged to pay close attention to flaggers and signs in the work zones, obey the posted speed limits and be on the alert for workers and equipment.

By Monday, June 28, both eastbound and westbound I-80 traffic will have shifted onto the right shoulders and new temporary pavement. The first stage of the project will consist of building new bridges, pavement, and a concrete barrier wall in the middle of I-80 from Gardner Street to west of Briggs Street. Two lanes in each direction will be maintained throughout construction. The eastbound I-80 ramp to Richards Street will close briefly during the second stage of construction, anticipated in late 2021/early 2022.

The existing bridges were built in the 1960s and are reaching the end of their useful life. The project, which includes replacing the existing four bridges with new wider structures, installing new signage and modernized LED lights, reconstructing, and widening eastbound I-80 from Gardner Street to Rowell Avenue, is expected to be completed late 2022. Once the eastbound bridges are nearing completion, focus will turn to the bridges in the westbound directions.

The eventual replacement of the Des Plaines River bridges and larger improvements to I-80 in Will County are made possible by Governor Pritzker’s Rebuild Illinois bipartisan capital plan, which will invest $33.2 billion in transportation infrastructure across all modes throughout the state. The estimated $1.2 billion project is included in IDOT’s current FY22-27 Multi-Year Program with a start date dependent on plan readiness and ongoing land acquisition.

The project will reconstruct 16 miles of I-80, from Ridge Road in Minooka to U.S. 30 in Joliet and New Lenox, while adding or extending auxiliary lanes to improve safety and reduce congestion, as well as improving interchanges at I-55, Illinois 7, Center Street, U.S. 52/Illinois 53, Richards Street and Briggs Street.