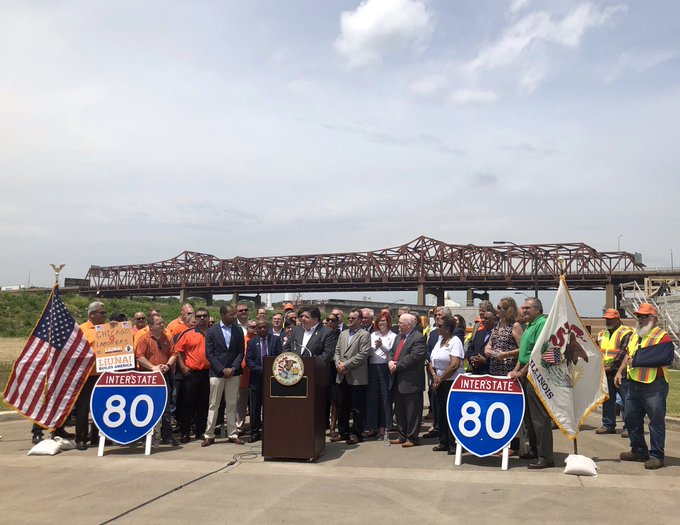 “Here in Will County, we’re putting $1.2 billion into rebuilding the infamous I-80 bridge over the Des Plaines River – infamous because too many of our residents are scared they won’t be safe driving over it.” JB Pritzker, June 28, 2019, Joliet, IL

“With this historic $45 billion capital plan, we’re fixing decades-long problems, creating good jobs, improving communities for the next generation — and doing it together, across party lines,” Pritzker said in a statement. “The Rebuild Illinois plan transforms our state’s approach to transportation infrastructure, finally treating our roads, bridges, and railways like 21st-century investments and not relics of the past. We’re also making critical investments in our higher-education institutions, our crime lab and veterans’ homes, early childhood centers, and expanding broadband access to communities across Illinois. With these investments, we’re creating and supporting hundreds of thousands of new jobs in our state. This is more than an infrastructure plan. This is a job-creation plan the likes of which our state has never seen.”

It was actually a series of bill signings, as Pritzker approved House Bill 62 on so-called horizontal infrastructure allotting $33 billion to transportation, $3.5 billion to education projects, $1 billion to the environment, and $420 million to statewide broadband expansion.

Pritzker signed Senate Bill 1939 to pay for it, doubling the motor-fuel tax to 38 cents a gallon and increasing title fees and vehicle-registration fees, and House Bill 142 to float bonds based on those added revenues. He also signed Senate Bill 690 legalizing sports gambling and allowing additional casinos in Chicago, Waukegan, Rockford, the south suburbs, Williamson County, and Danville to fund so-called vertical infrastructure through a $1-a-pack increase in the cigarette tax to $2.98 as well as additional parking taxes. It also creates the Illinois Works Jobs Program Act, including the Illinois Works Preapprenticeship Program and the Illinois Works Apprenticeship Initiative.

READ THE FULL STORY AT
www.oneillinois.com