A message from the I-80 bridge — get out the repair tools, Illinois’ 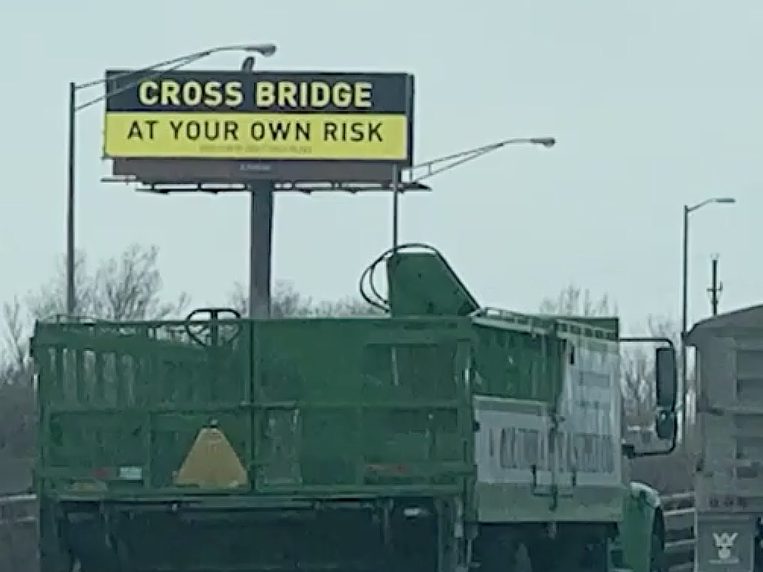 A billboard purchased by IUOE Local 150 warns motorists that the I-80 bridge in Joliet is not safe. State officials say they’re working on repair plans. | FOX32 Chicago

In what other state do highway billboards warn you to drive over a bridge at your own risk? We’re guessing it is not many.

But that’s what motorists on I-80 see as they cross the Des Plaines River in Joliet. A billboard on one side of the bridge says, “Cross Bridge at Your Own Risk.” A billboard for traffic going the opposite direction says, “Bridge ahead in critical condition.”

And you thought the unexplained whining sound from your alternator was bad.

We’re guessing those signs make motorists a bit jumpy, especially if they remember the I-35W Mississippi River bridge that collapsed in 2007 in Minneapolis, killing 13 people and injuring 145. Or the Lake Shore Drive bridge that had to be shut down in early February because of a crack in a support beam. That could have been a big disaster if no one had noticed the crack in time.

Meanwhile, 165 miles away in Springfield, lawmakers will debate a $2 billion-a-year Senate amendment that emerged last week to fix deteriorating roads, bridges and transit with a 19-cents-a-gallon increase in gasoline taxes, a doubling of license fees, an increase in registration fees for most vehicles from $98 to $148, and other fee increases.

We don’t know if the final capital plan will revise those tax-and-fee increases, but the I-80 bridge illustrates why something must be done.

The rotating message billboard ads are the part of an International Union of Operating Engineers Local 150 campaign to warn motorists of deteriorating road and bridge conditions, especially on the span over the Des Plaines River. The union has an ownership stake in the Chicago Sun-Times.

Meanwhile, the Illinois Department of Transportation says the bridge is safe for now, and the agency is planning to spend $5 million starting in April to fix problems found in inspections.

END_OF_DOCUMENT_TOKEN_TO_BE_REPLACED

Overnight lane closures on I-80 bridges in Joliet

END_OF_DOCUMENT_TOKEN_TO_BE_REPLACED

Due to the rainy weather the daily inspections for today, April 30th have been canceled.

END_OF_DOCUMENT_TOKEN_TO_BE_REPLACED

Inspections Scheduled On I-80 Bridges Over Des Plaines River

END_OF_DOCUMENT_TOKEN_TO_BE_REPLACED

Regularly scheduled inspections of the Interstate 80 bridges over the Des Plaines River will begin Monday, April 29 in Joliet, ahead of larger repairs.

END_OF_DOCUMENT_TOKEN_TO_BE_REPLACED

Joliet, Ill., was at one time a true blue-collar city. Steel fabrication echoed through the streets of this river dwelling … a constant buzz was in the air.