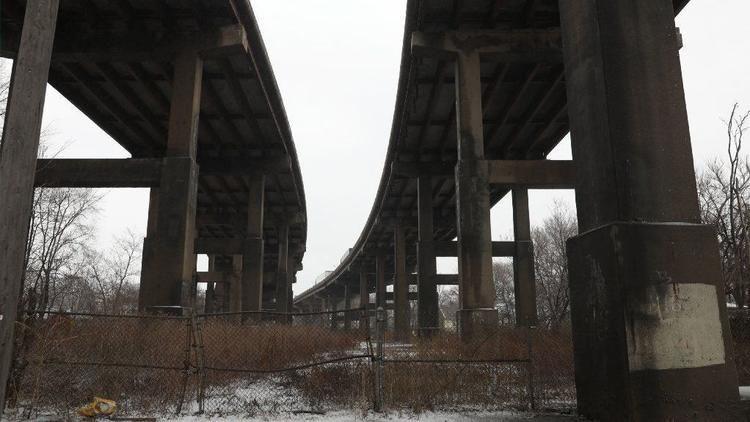 The east-side span of Interstate 80 near the Des Plaines River in Joliet is seen in this photo taken Tuesday. Some of the most structurally worrisome bridges in the area are not in Chicago, but along the rapidly developing I-80 corridor in Will County. Abel Uribe, Chicago Tribune

JOLIET — The discovery of cracks in steel beams along Lake Shore Drive this week raised alarms about other problem bridges.

Two of the worst bridges in the state are along Interstate 80, crossing the Des Plaines River in Joliet, a rapidly developing area in Will County with heavy interstate truck traffic and distribution centers for companies like Amazon and Dollar Tree.

A prolonged shutdown of the bridges would be economically devastating. Joliet Mayor Bob O’Dekirk on Thursday said he is asking the city’s public safety officials to begin working with county, state and federal authorities to establish a specific plan of action in case of a partial or complete failure of the structures.

He is also pressing lawmakers for emergency funding to repair and replace the bridges. O’Dekirk warned that unless the Illinois or U.S. departments of transportation give the city a “definitive plan” for funding and repairing the bridges in the near future, he will order a diversion of vehicles away from it, warn motorists of potential dangers and advise on alternative routes.

“Do I think the bridge is going to fall in the river tomorrow, no, but these (IDOT) reports are pretty alarming,” said John Greuling, president and CEO of the Will County Center for Economic Development. “There are a lot of local folks who are concerned about this.”

END_OF_DOCUMENT_TOKEN_TO_BE_REPLACED

Overnight lane closures on I-80 bridges in Joliet

END_OF_DOCUMENT_TOKEN_TO_BE_REPLACED

Due to the rainy weather the daily inspections for today, April 30th have been canceled.

END_OF_DOCUMENT_TOKEN_TO_BE_REPLACED

Inspections Scheduled On I-80 Bridges Over Des Plaines River

END_OF_DOCUMENT_TOKEN_TO_BE_REPLACED

Regularly scheduled inspections of the Interstate 80 bridges over the Des Plaines River will begin Monday, April 29 in Joliet, ahead of larger repairs.

END_OF_DOCUMENT_TOKEN_TO_BE_REPLACED

Joliet, Ill., was at one time a true blue-collar city. Steel fabrication echoed through the streets of this river dwelling … a constant buzz was in the air.